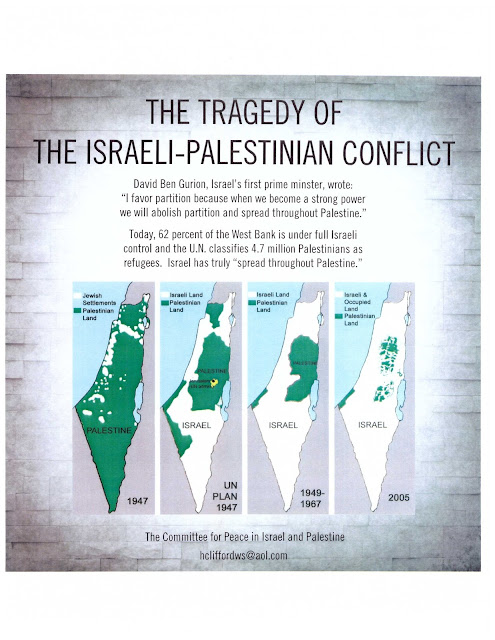 Palestine 2012 – Gaza and the UN Resolution

Noam Chomsky is Institute Professor emeritus at the MIT Department of Linguistics and Philosophy. He is the author of numerous bestselling political works; he is also a member of the IOA Advisory Board.

Posted by Tony Ernst at 3:41 PM No comments:

From The Israeli Committee Against House Demolitions - USA


By ICAHD-USA
We, the Israeli Committee Against House Demolitions-USA, write to you, the United Methodist Church, the Presbyterian Church, and the Episcopal Church, to support and encourage you in your efforts to selectively divest from corporations that are complicit in Israel’s ongoing policy of occupation and Jewish colonization of Palestinian land under Israel’s control. We are pleased that you have taken a leadership role to divest in hopes of bringing peace to the people of Israel/Palestine.
We… read more

Posted by Tony Ernst at 7:10 AM No comments:

A word about this blog

This blog continues in the spirit and despite the absence of our late comrade Victor Teich.
Henry C. Clifford and Silvia Tennenbaum - co-chairs: The Committee for Peace in Israel / Palestine (COPIP)
Posted by Tony Ernst at 8:30 AM No comments:

COPIP - This is where the terror begins 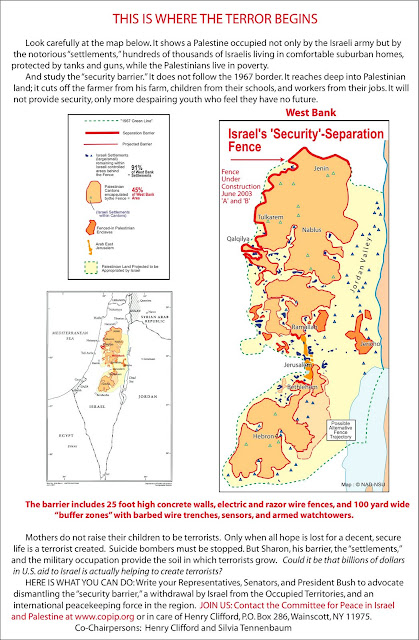 Posted by Tony Ernst at 8:02 AM No comments:

Robert Fisk: An American Bribe That Stinks of Appeasement

In any other country, the current American bribe to Israel, and the latter's reluctance to accept it, in return for even a temporary end to the theft of somebody else's property would be regarded as preposterous. Three billion dollars' worth of fighter bombers in return for a temporary freeze in West Bank colonisation for a mere 90 days? Not including East Jerusalem – so goodbye to the last chance of the east of the holy city for a Palestinian capital – and, if Benjamin Netanyahu so wishes, a rip-roaring continuation of settlement on Arab land. In the ordinary sane world in which we think we live, there is only one word for Barack Obama's offer: appeasement. Usually, our lords and masters use that word with disdain and disgust.

COPIP advocates a two-state solution to the conflict ― a complete withdrawal by Israel from the Occupied Territories, an autonomous and contiguous state for the Palestinians, an end to violence on both sides, and mutually recognized, secure borders for both countries.

COPIP seeks to educate the public through speakers and advertisements; it also lobbies local and national representatives to seek a balanced approach to the conflict. Speakers sponsored by the Committee have included the Palestinian Ambassador to the United Nations; a representative from Peace Now, the Israeli/Jewish-American Peace group; a representative from Human Rights Watch; the coordinator of the Israeli Committee Against House Demolitions; and an Israeli soldier who is a member of Courage to Refuse.